Perth was one of Scotland’s most important medieval royal burghs. Many trade routes met here and ships arrived on high tides from England and the continent. Perth’s craftsmen were rich, skilled and inluential and the markets lourished. While little of medieval Perth survives above ground, there is still evidence of this important past throughout the city centre.

Discover medieval Perth in the year 1440 through a new series of 11 interpretation boards around the city centre. Unlock  360° virtual reality reconstructions through your phone and reveal fascinating facts about the royal burgh’s amazing story. Historical characters will come alive in their digital surroundings and tell you some more about what their lives and the city was like in their time.

Leaflets are available to download here or from Perth Visitor Information Centre and many other city centre venues. You can also start exploring the trail virtually from this page or download the App directly to your device, just search ‘Perth 1440’ in the App store. 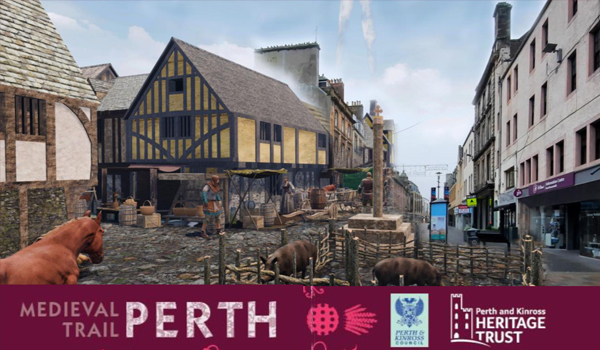 Click the play button to get started. Bring up the map by clicking the icon in the bottom left corner.

Trust staff are largely home-working until further notice. Please note contractors/deliveries requiring access to Lower City Mills should arrange with a member of staff. We continue to deliver many of our projects and services, however, some work has been postponed or redesigned. Please ensure all enquiries are directed to staff via email as monitoring of office telephones, and mail, is reduced.

General enquiries can still be made using the Contact Us page.